The Story of Ummah Masjid 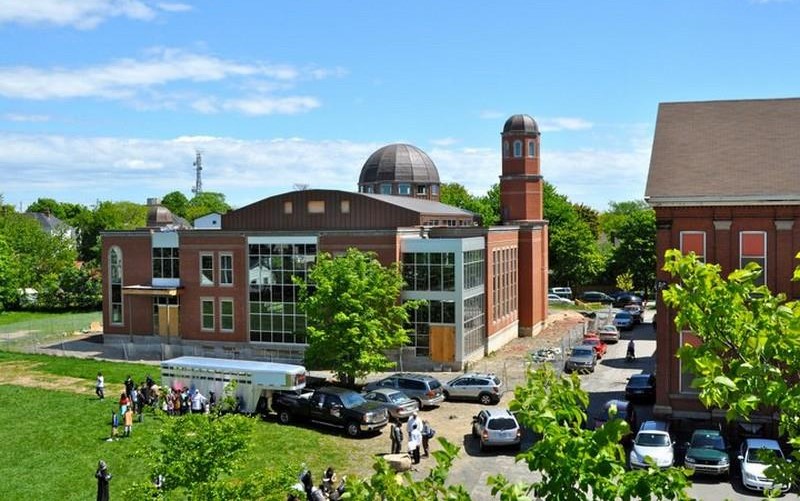 During the 1990’s the Muslim community in Halifax grew rapidly and exceeded 10,000 Muslims due to influx of new immigrants mostly from the Middle East region following the first gulf war. During that time, the Maritime Muslim Academy (used to be called Halifax/Dartmouth Islamic School) was using the Dartmouth mosque for its classes. Due to the progressively increasing numbers of Muslims, Dartmouth mosque became insufficient to accommodate school students.

Furthermore, a large number of Muslims who worked in Halifax found it difficult to commute to Dartmouth during lunch hour to perform Friday prayers at Dartmouth Mosque. Therefore, Dalhousie Student Union Building (SUB) was used for the weekly Friday congregation to allow students and those who work in the Halifax area to perform their Friday prayers easier. The Maritime Muslim Academy (MMA) with the help of the executive of the Islamic Association started searching for suitable space in Halifax that is capable of accommodating the Islamic School as well as the weekly Friday congregation. There were several unsuccessful attempts to purchase property in Halifax until 1996 when the City of Halifax advertised the Chebucto schools for sale. There were only three bids for the purchase of these schools, which came from the African Canadian community, Aboriginal community and the Halifax Muslim Community. The City was not satisfied with the limited number of bids and consequently it was dropped. However, the Islamic Association was able to reach a deal that allowed MMA to use one of the school buildings (Building C) as “lease to buy” without specific details or time frame.

In the spring of 1996, the Muslim Academy moved to the upper level of the school building “C”, while the basement was dedicated to be used as a prayer hall (Masjid) for the 5 daily prayers as well as for the Friday congregation. Meanwhile, MMA board kept pursuing the city of Halifax officials to sell the property and honour their “lease to buy” deal. Consequently, in 1998 the Halifax Regional Municipality (HRM) offered the selling of all 3 school properties. Only Maritime Muslim Academy and Maritime Conservatory of Music were allowed to bid by submitting proposals to buy all 3 school buildings. However, MMA and the music conservatory reached mutual agreement and decided to split the deal and submit one joint proposal to buy the property. They were able to convince HRM to accept this joint proposal instead of 2 separate proposals competing to buy all 3 buildings. After lengthy negotiation, it was agreed that MMA would buy the 2 school building known as building “B” and building “C” at a cost of $157,500 and the music conservatory to buy the heritage school Building known as Building “A”. While MMA was conducting fundraising to collect the purchase price for the property, a member of the Saudi Arabia Royal Family died on the Swiss Air flight 111 that crashed on September 2nd, 1998, into the Atlantic Ocean near the Canadian coast line of Peggy’s Cove not too far from Halifax (southwest of Halifax at the entrance to St. Margaret’s Bay). Consequently, the family of the deceased Saudi prince donated the property purchase price to MMA as a “continuous charity” (Sadaqah Jaryah) to bring mercy on the late prince. The MMA deal of purchasing two School buildings was finalized and the deal was closed in December 1999.

Following completing the purchase, in January 2000, MMA board of directors appointed a “Building Committee”, which was composed of representative members of the diverse Muslim community in this region with a mandate to help MMA decide on the best uses of the two newly purchased properties. This is to ensure that these properties serve the entire Muslim community in this region in the most possible efficient ways. The building committee spent 4 months of meetings, deliberation and consultation with experts in assessing building structural condition. In April 2000, the committee concluded that the school classrooms should stay in building “C” and to move science lab, library, computer and arts lab to the upper level of the other building. Furthermore, the committee recommended a plan of 2 terms for having a new Masjid. The long term plan was to demolish building B due to the poor conditions of the structure and to rebuild a new structure. It was strongly recommended that the new building should accommodate a large Masjid as well as other facilities such as gymnasium, classrooms and space for labs to serve MMA needs and to be a community centre for the HRM Muslims. Nonetheless, the short-term plan was to use the basement of building B as a prayer hall (Masjid) with minimum alterations to minimize expenses and to keep using it until the community is ready to carry out the long-term plan. In 2001, an HRM inspector visited the school while installing a new fence around its property and he stopped the fencing work. The inspector alleged that all 3 school buildings on the site are designated as Municipal Heritage” and MMA can’t make such changes for this reason. It took MMA 4 consecutive years of continuous hard work attempting to prove to the municipality officials that MMA buildings (B & C) were not included in the heritage designation of the other building A. In May 2005, HRM consent and concluded that our buildings (B & C) are not heritage, which removed a major obstacle that was in the way of proceeding towards a new Masjid. Subsequently, MMA started the search process for a suitable and acceptable Masjid design. The first acquired three design attempts that were obtained for the new mosque were not favourably approved by the Muslim community. However, the fourth design that was brought forward by the Imam and a community member portrayed a modern Masjid that has additional facility like a multi-purpose hall/community centre was favourably and unanimously approved by the Muslim community.

One of the major features of the new design is that the building has inviting/welcoming appearance and it blends very well with the surroundings of other existing structures. This is to bring harmony and preserve the outside appearance for the heritage building A. New building committee and Technical committee were involved in the construction of the new building, which worked together very well with substantial autonomy overseeing the multiple construction phases. The initial building construction permit was obtained in November 2007 and the old building structure was demolished in April 2008. However, the actual construction started by excavating the building foundation in July 2008. The prayer hall was substantially completed and opened for use by the community with a partial occupancy permit on August 1st, 2011 for the first day of Ramadan. Currently, the Ummah Masjid is in the final stage of completing the construction process.

The final full occupancy permit was provided to us by the HRM in May 2013. May ALLAH (SWT) accept the hard work, dedication and the commitment of all who participated to complete such huge project of building the house of Allah and May He reward them with his blessing and houses in paradise.

You can always unsubscribe if you don't want to receive updates.